Shifting with `<~` before a cycle starts doesn't trigger audio

Hi folks,
I'm trying to shift a bass kick slightly before the 1 downbeat on every second cycle.
Starting with a simple pattern sound "bd sd", then:

should shift just the kick early by 0.125 of a cycle

I'm debugging my logic with feedforward, and both the 0.125 and bd are highlighting at the expected time, but there is no bd audio output

If I reverse the logic, ie 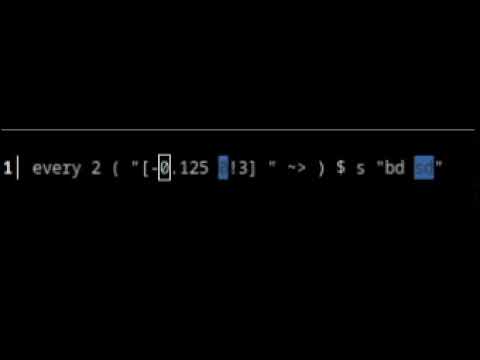 Is this a bug?

i don't think it's a bug. i think you are expecting to always hear the kick on the 1 and then every other bar hear the stutter but tidal is shifting time back every two cycles and is missing that always-on downbeat. effectively, you need to add a second instance of the kick to make it work.

I was after a simpler way to do this:

I had a bit of a discussion on the new discord chat about it, nudge "-0.1" was suggested which is in units of seconds, and has limitations of being bound to a maximum shift equal to the latency between sc and tidal (in practice I want to use this at slower cps so it's less effective)

Anyway, the reason I was wondering if it was buggy was because @yaxu's feedforward was actually behaving the way I expected, while superdirt/collider was not - if you watch the vid, the visual triggers land in the same place as my example above

oh, ok, got a little swing to it, i see now what you mean.

yeah i kinda suspected this is what was happening with that. good to know