I need some sort of tech support/help :)

tidal help1133×529 50.6 KB
Help, i have installed linux on my old lenovo t520 to create a tidal and hydra live performance computer. I can not get tidal up and running and i have a gig next friday. So i need some help to make it run. hope someone can help me

also i am new to linux mint.

can you detail what steps you've taken so far to install tidal?

From the error message, the ghc-pkg ( the haskell package manager), cannot be found. If you installed via "apt install haskell-platform", that should solve the problem, though i'm not sure why "apt install cabal-install" didn't automatically install haskell as a dependency.

Did you try the automated method (ansible works on mint)? 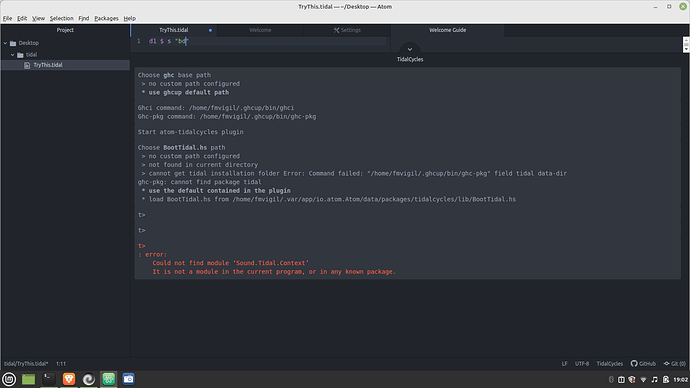 Huh, interesting - I did a fresh install on ubuntu 22.04 last night, and ghc-pkg had difficulty with the same command you've screenshot (ghc-pkg field tidal data-dir)

I'll have a lookin into it today, but in the meantime you may find that vscode works - try that playbook from ansible instead