I wrote up the steps I took to get Tidal up and running on Arch Linux, a process that’s gotten considerably easier since the first time I did it

Hope it will be useful for somebody!

Thanks for sharing this. I use almost the exact same setup on Arch. The haskell-tidal package really is a life saver as I could never get Tidal to compile without errors.

Indeed... I was so happy when I discovered the package in AUR! I've been away from Tidal for some time now, and I did manage to get it up and running on my previous arch install a couple of years ago, but there was a lot of fiddling going on with ghc-static libs and whatnot to make it compile... I'm also super happy that tmux is no longer a requirement for making it run in nvim!

Just applied this and is working fine! Thank you

What I'll like to do is getting it to work in tandem with a script for running supercollider server in the background. Someone has an idea on how to implement this?

should be cd ~/.local/share/nvim/plugged/vim-tidal I think

The howto doesn't work for me. nvim test.tidal and running a tidal line, doesn't bring anything up.

Actually, I would like to use the tmux way, but using nvim instead of the default vim.

Edit: Ok got it via GitHub - tidalcycles/vim-tidal: Vim plugin for TidalCycles

So then you can skip the 'make install' step.

Comment out / don't use in your nvim init file: let g:tidal_target = "terminal"

And open a other tmux pane or window using: nvim test.tidal

For managing tmux sessions without scripting, one can use tmuxp

A session manager for tmux. Built on libtmux. Python Package Docs Build status Code Coverage License New to tmux? The Tao of tmux is available on Leanpub and Amazon Kindle. Read and browse the book...

And put your configuration in a *yaml file.

On Linux Bash is your friend.
https://mywiki.wooledge.org/BashGuide

Tmux has scripting options as well. And tmuxp could help you setting up tmux session.

One of the key features of using nvim is that you don't need tmux since neovim can embed a terminal natively thus simplifying your plumbing requirement significantly - my understanding is you are bypassing this feature though? 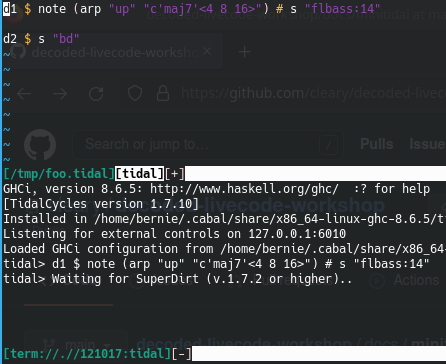 I know more or less how to work with panes in tmux (resizing etc.). So I skip time investment to learn how to do that it nvim.

Fair enough, it's probably worth clarifying that though - given for newcomers a tidal install is already quite a mountain to climb

Sure, but my comments where for myself, not for newcomers.

In general, my rule of thumb is, use (small) applications that are made for the task. Tmux is made to manage terminals, so I do use that. Tmux itself is not hard, but it has a learning curve. You've to set down and learn some basic shortcuts, before it becomes useful.
https://leanpub.com/the-tao-of-tmux/read

No problem, but you've shared quite a deal of setup code to a public forum so you'll have to forgive me for thinking that it was going to be targeted at more than personal use.

Fwiw I'm a daily tmux user of about 10 years (work context), but I still prefer the neovim terminal containment for tidalling

You're probably right. Once you know how to deal with resizing windows in nvim (:vertical resize 40), it's probably easier.