Alternatively, we could introduce a breaking change (or an alternate notation) for inversions which could then apply to drop voicings:
'maj7'iN and 'maj7'dN

i love this idea and think it will really tidy up the existing inversion syntax (since it's kind of confusing anyway). i think things will get really fun when we can build patterns inside each of the chord arguments. (i've already opened a ticket about this). i would love to be able to pattern out inversions AND steps without having to resort to lengthy workarounds. below is an example of what i have in mind.

otherwise you'd have to type out something like 15 variations within angled brackets just to achieve the above.

i would love to be able to pattern out inversions AND steps without having to resort to lengthy workarounds.

Yeah, this is an excellent idea! Even further outside my skkllset to implement, but a very "tidal" endpoint😉

Thanks again @cleary for pushing the ball forward with these commits.

Drop voicings would be lovely. I agree 100% with @Raph , to me it's the natural extension of the open voicing 'o modifier.

Patterning them would be amazing. It would be a gateway into advanced, unfamiliar harmonies. Jazz pianists might even use TidalCycles to study new shapes. And i love the explode octaves idea haha.
This is really approaching a grammar of voicings.

OK, so as cleary pointed out, order definitely matters with drops and inversions.
Here is a maj7 example, assuming these modifiers are chainable and left-associative:

As this example illustrates, different chords are produced by swapping the modifiers.

It is interesting that the second chaining order ends up producing the original unmodified chord. Hmmm....

Hey all, it's a huge thread and I may have missed something.

Alternatively, we could introduce a breaking change (or an alternate notation) for inversions which could then apply to drop voicings:
'maj7'iN and 'maj7'dN

I 100% love this. The idea that you can only invert a chord so far, aside from western theory heritage, doesn't follow the Zero-One-Infinity rule, and this is a very neat solution. I also miss a general invert function (as in invert 5 "0'min6")
edit: it would be dope being able to write "[0,2,4]'iN" for inverting anonymous chords

If you're going to write out individual notes by hand, why use an algorithmic music system?

I wanna pitch in on this: music as data has benefits in itself. One can quickly try the same melody/voicing under different keys, for instance (good luck with that on a regular notation software).

using 's' for notes that are sharps and 'f' for flats

This can be just personal, but one thing I find mildly frustrating is that s and f are eagerly evaluated, meaning scale "minor" "0 2s 4 7" is not a major arpeggio (evaluates to "0 5 7 12"), when it feels like it should be (as in "0 4 7 12"). This is because s is evaluated before the call to scale, but I don't really think that's what a user would expect to achieve. Similarly, typing scale "major" "0 2b 4 7" feels like it should be minor - isn't that how key signatures work in sheet notation? (flattening/sharpening 'escapes' the current key)

Anyway, this is a great thread, and it makes me super excited for the next tidal updates

@ghales on @cleary ‘s point about inversion and drop “functions”—i.e. i3 instead of iii... yes 100%! Something like “[0,7,14,17, 22]’i5’d3” would combine chaining and “infinite” inversion and drop functions. (The “zero one infinity” idea really cleared this up for me.). This would address much of @kit-christopher’s suggestions too, I believe.

Euclidean functions in mini-notation “0,5,7” are the best precedent for this being possible (and eventually patternable), I think??? Unless I’m forgettting something?

Also, great point @ghales about sharping being a way to get outside the scale.

I would like to second Raph's suggestion about including some new syntactic sugar for defining our own pitch collections on the fly. I think the strength of Tidal is in how it does things differently and is fun and responsive sandbox environment. It would be great to be able to quickly define these pitch collections and then be able to transform them with inversions and drop or open voicings as well. Currently the discussion on harmony has been tertiary focused but implementing something like what Raph describes would make working in quartal, quintal, and secundal harmonies far easier and more flexible.

Edit: Also on a related note has anybody had experience with Euterpea and/or reading the Haskell School of Music? http://euterpea.com/haskell-school-of-music/. I have been slowing going through this book and it is actually quite awesome how it takes you step by step through the process of creating Euterpea and is a decent (if fast paced) intro to Haskell programming. Anyway I'm reading it currently while trying to learn Haskell with "Learn You a Haskell", so I'll report back about anything interesting I find that might give us some insight into how to proceed.

Some great stuff in here! I've skimmed quickly, and plan to revisit in detail but I'll just call out a couple of highlights:

This is cool! I think this could be a good next step on my learning journey

edit: it would be dope being able to write "[0,2,4]'iN" for inverting anonymous chords

The concept of arbitrary pitch collections is something that is very present in my head when I'm thinking about this stuff - a set of common use chord shortcuts, and then the ability to quickly define and modify arbitrary note collections as though they were a standard chord, is an endpoint I'm hoping to get to

Edit: Also on a related note has anybody had experience with Euterpea and/or reading the Haskell School of Music? http://euterpea.com/haskell-school-of-music/. I have been slowing going through this book and it is actually quite awesome how it takes you step by step through the process of creating Euterpea and is a decent (if fast paced) intro to Haskell programming. Anyway I'm reading it currently while trying to learn Haskell with "Learn You a Haskell", so I'll report back about anything interesting I find that might give us some insight into how to proceed.

This looks from the outside like something I will need to work through too - thanks a lot!
as a side note, I have a selfish interest in using this project to advance my haskell skills in order to contribute more, but I am interested in seeing what others are coming up with too and my time is extremely limited, so please feel free to work on and share stuff that will move us along

a couple more updates, I went back to the drawing board to redo my workflow so that I could separate breaking changes, dependent changes, etc so all the github links above don't really apply anymore (they still exist, but link to unattached forks).

None of these include any breaking changes, so I'm hoping they'll be acceptable to add to the next minor release (1.7.2).

...and with that, I think I've met the initial improvement targets. I've got a good idea of where I'll be heading from here, based on the comments, I think everyone is in agreement with that direction, namely:

I would call these the intermediary steps, before we head into @jwaldmann's semantics territory -

If I get through this batch on my own, I will be in far better shape skill-wise to consider attacking the semantics application ... wish me luck!

huge leap forward! so excited to see these changes come to fruition!

eek I forgot one!

Nice one @cleary! I've merged the PRs. What could be really nice is having a list of expected mini-notation chords together with expected outputs. Then we can add that to the automated tests to catch regressions.

What could be really nice is having a list of expected mini-notation chords together with expected outputs. Then we can add that to the automated tests to catch regressions.

Can do, I'll look at this next

hope this isn't is (1) a dump question: Is there a place where I can learn about the new chord naming conventions or is this knowledge right now only available within this thread?

I really don't mean to ask dump question on purpose.

Hi, this will be a place when it happens, I'll update the tidal cycles wiki as well

At this point there are no major changes, I've just made things more consistent (eg ref the m9 but no min9 mentioned above

Next change will be a test suite, then I'll probably start on the complementary functions option (6), which I think might be the next easiest task/best path to learn from.

A quick update, I've procrastinated long enough and am looking at this again, beginning with the unit tests. I have a steep curve ahead, and it's slow going but if you're interested there's a branch here where I'm working:

Pattern language. Contribute to cleary/Tidal development by creating an account on GitHub.

chord test PR is in

Hi all,
I apologise for a complete and utter lack of movement here - 2022 has been the wrong kind of exciting for me and I've simply had to let stuff slide, this included. @mrreason 's done some work in this area recently, so I figure an update is warranted.

I spent a bit of time discussing and working out how to recursively parse the chord modifiers, I came up with this code:

this is behaving as I would expect, you can pass it any combination of any number of chord modifiers, it will crash if you pass it an unknown option :

If you're interested in checking out the discussion that got to this point, please see:

Discord - A New Way to Chat with Friends & Communities

Discord is the easiest way to communicate over voice, video, and text. Chat, hang out, and stay close with your friends and communities.

If anyone would like to pick this up, be my guest!

yes i also think this would be a good way to do it.

i think we would have to follow these steps:

TBH I wouldn’t be too worried about the data structure, as the grammar itself is rather more important in terms of design (though in this case largely already settled, unless there’s some need/want of a change in grammar.) The code around the resulting data structure can easily-enough lean hard into the type system for confident maintenance and expansion.

ok, I spent a bit of time to implement the following: 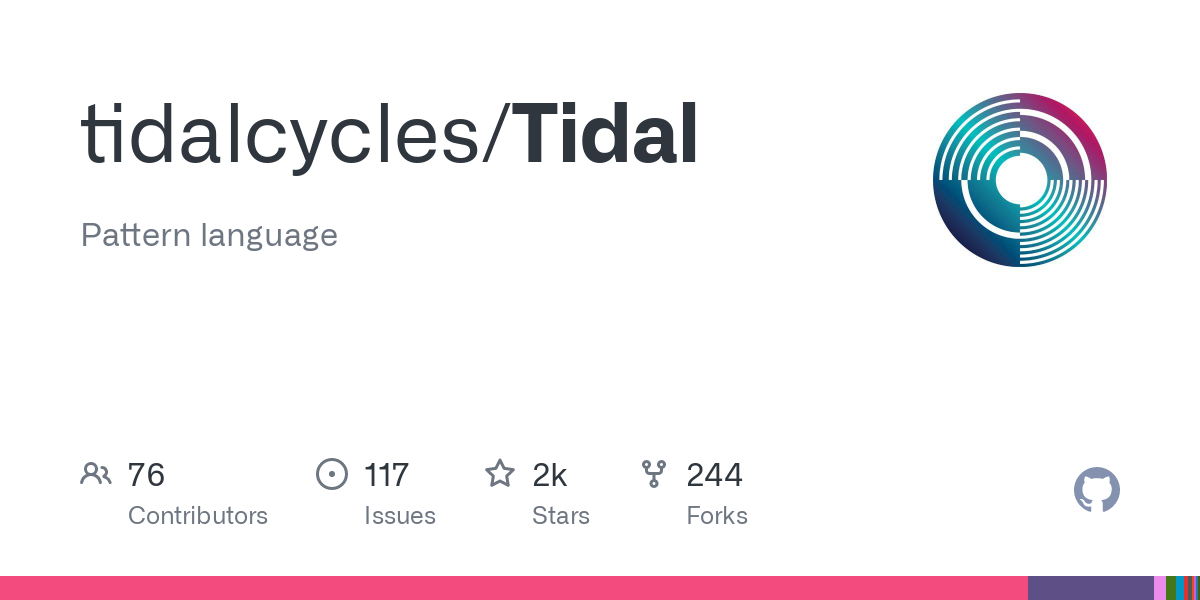 Pattern language. Contribute to tidalcycles/Tidal development by creating an account on GitHub.

I first tried to do it via a data structure Chord but that wasn't really leading me anywhere, so I added a node to TPat, specifically for chords, made a simple sum type for Modifiers. Then i implemented parsers for the modifiers and lastly a function

that can turn given patterns of notes/doubles, a pattern of chord names and a list of patterns of modifiers into a single combined pattern that represents the specified chord. An example:

what this means in summary is that all of the old features should still behave the same, but now you can also do most of the things that were collected in this thread (patterning everything, stacking modifiers, dropN notation, new inversion syntax).

my changes also seperated the syntax and semantics more clearly, at the expense of a more tricky TPat type, depended on some language extensions.

It would be great if some people could look at the code and let me know what they think.
Also some people testing the code would be perfect (clone the repo and cabal repl, then import Sound.Tidal.Context and :set -XOverloadedStrings when in the repl, then you can type expressions like note "c'maj'i" and try to generate some unexpected result)