Recently (Samples lazy loading · Issue #238 · musikinformatik/SuperDirt · GitHub) a new feature on superdirt was implemented, it permits to avoid loading of the whole sample libraries in memory, and loading every sample the first time it's requested by your tidal code.

To enable it, update superdirt to the last commit (go into the downloaded-quarks/SuperDirt folder then git pull) then, in the superdirt startup code, before any ~dirt.loadSoundFiles call, put a ~dirt.doNotReadYet = true;

I'm using it by default, and my old laptop is happier!
Feedbacks welcome

I haven't tried it yet, but thank you so much for implementing that!

by the way. I have tried it for a bit and it seems to be working great. Thank you for implementing this

@th4 @polymorphic.engine
Just for information, that's not an implementation of mine, it was done by @julian (superdirt mantainer), I just did the proposal, debugging and encouragement

Thanks for the idea and for helping with the testing @ndr_brt ! It was quite easy to do, so we were lucky …

Just make sure that you use a setter:

This is huge! Thanks @ndr_brt

I run a pretty old machine here too (+10years), it has 16GB of ram but I find superdirt/sc sample loading will often just push it over the edge into swap... which requires meticulous sample set management.

This has made a huge difference to me ... it's made possible the use of some much lower spec machines for teaching/loaning, it's really opened up a lot of possibilities - thanks again

edit: one thing I will note, is it doesn't seem to handle missing samples too gracefully now:

thanks, just commented the issue

@BXHD also noticed that synthdefs no longer work with the startup.scd change - haven't had a chance to confirm

I ran into an issue trying to do the git pull. I initially ran into an error so I tried this:

It then asked me to leave a comment as to why I was merging commits (or something like that). I couldn't figure out how to enter in my comment. I ended up closing the terminal and trying it again and I got a 'fatal error' because of an existing unfinished merge.

Does anyone know what I did wrong?

And thanks, this looks really promising.

I think that's because you weren't on the develop branch. Try to exec git checkout develop then git pull

This should be ok now

So what happened was there are some changes in your superdirt directory compared to the remote version - hence it requested the merge.

I would do the following:

That worked @cleary. Cheers all!

There are further issues with synths (and external midi) that @julian has just patched ... knowing your external midi workflow is pretty extensive @ben you will want to update your git:

Ahhhh. Thanks for this!

I indeed got a bunch of errors today so I had to turn off ~dirt.doNotReadYet = true; to get it to work.

Having a bit of trouble with this...keep receiving the same error when i try to do this, not sure what I'm doing wrong here... 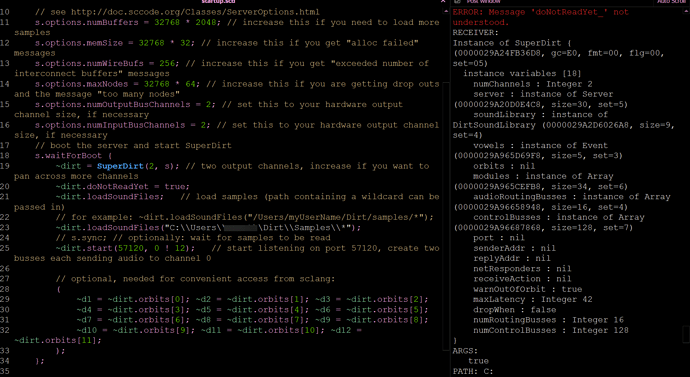 Probably you have an old version of superdirt, please try upgrade to 1.7.3