Basically, using TidalCycles, at seemingly random points, it just hushes everything and then won’t play anything until I reboot TidalCycles.

No error messages pop up, nothing registers in supercollider… and it has happened in the middle of shows…

I really need some help trying to work out how to diagnose this issue… please help! I have a show soon, and this is making me nervous…

It's hard to say without a console output... which os are you using?

Am I able to go back and find historical logs in the Mac OS console? If so, I don't really know what I'm looking for...

As you described it that could be a problem with the os audio system rather than a problem with tidal/supercollider, because when they break there are always some console logs that pop up.

Don't know if on mac os x there's a syslog or something like that that that reports all the system logs. Maybe there are some info

So, I dug a bit into the console, and poked around blind until I found something that seemed suspect that occurred at roughly the time that I last encountered that issue...

Do you think this could be the problem:

Thanks in advance once again!

I will be honest, got no idea

Maybe an osx user could help you

Ha ha. Well, thanks for trying!

Any Mac users out there?

i'm sure i don't know the answer. but i know a good question. does it hush, or does it go totally silent out of a sudden. if you don't understand what i mean:
all sound suddenly stops? or does the note flow suddenly stop? you can tell with long samples easily, because they still produce their last sounds even if they won't play anymore. for example the tail of a reverb or the decay of a cymbal

Good question- it acts as if is hushes. So, the samples trail off naturally as if I had hushed them. Then, all I need to do is "Boot" Tidal in Atom, and it is fine again (but of course, the mood has already been broken).

I have a feeling it's some kind of overload, because most annoyingly it tends to happen at song climaxes.

I imagine this narrows down what the error could be... but I'm not sure how best to diagnose it, because this only happens since I moved to a MacBook Pro.

My old computer would skip during labour-intensive songs, but never just stop like this. My new one doesn't skip at all... just seems to shut down tidal, while refusing to spit out an error message.

when it freezes, do you see anything unusual in the [MacOS equivalent of] task manager? you could narrow it down even more if you see something in the haskell interpreter, or in scsynth

on windows the process is called ghc.exe
should be named something similar on mac

I'm getting to the point where I am having to ask so many increasingly granular questions that I feel I really should be paying for help...

I'm afraid I don't know at all how to even google search to understand what to do with your last message... where do I find these "processes" ? Are they just a file hiding somewhere in my library? Some kind of report?

Sorry... I'm just a below-average musician larping as someone who knows how to use computers.

no problem! it's best if you are clear about your experience so anyone who knows about the topic can help you understand better. i don't want to confuse you further since I've barely used Mac like 3 times in my life lol. I'll try to explain while googling the mac equivalents for stuff.

When I say 'process' I mean the programs and stuff that appears in the 'Activity Monitor', under 'Process Name'. And something named ghc or ghci should appear when using Tidal, that's Tidal itself running. SuperCollider will appear named as 'scsynth'. There should also be 'sclang' and 'scide'. Scide is the process for the window you see when opening supercollider, sclang is the supercollider language, and scsynth is the server, the thing that produces sound, so this one it's the most important.
When your tidal hangs, please check these processes (ghc, and scsynth), maybe even take a screenshot. We may see if one of them is actually hanging, if CPU goes to high, or too low (0%)

My biggest issue now is trying to cause the problem again... it's weirdly difficult to force...

OK, well... speak of the devil... I played around for just two minutes, and the same issue came up again...

Here's the screenshot taken a second after the error occurred: 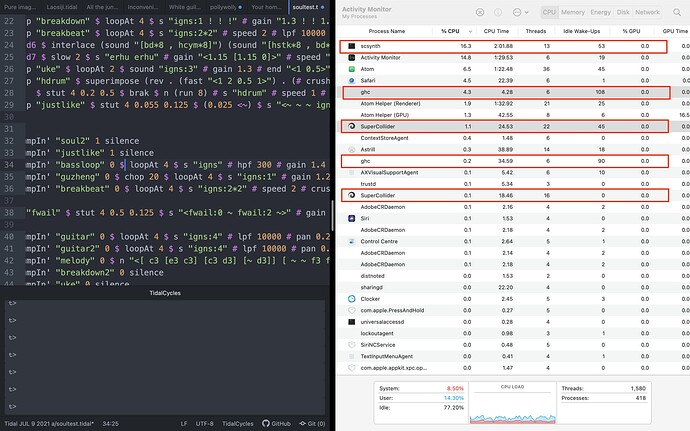 Weird thing is, it doesn't happen at all on other songs which are far, far more CPU-intensive...

Do your eagle-eyes spot any clues here?

So, after Tidal stops, no error message is spat out... until I reboot Tidal. At which point, I get this:

I looked this up, and it appears to be a SIGKILL command... does anyone know how to dig into this deeper and find out what is causing this?

that seems like a crash,, maybe you're doing some illegal operation that throws an exception (an error) which hasn't been already handled. this could also explain how it's unrelated to the resource demand of your work.
please share any Tidal code you've experienced a crash with

OK. If that's the case, I'll just go through and meticulously tidy up my code... see if there's anything obviously stupid in there ruining everything. As and when I have another crash, I'll post the relevant bits of code.

I have a suspicion it has something to do with my unnecessary overuse of clashing "cut", "room", and "jumpIn'" functions... I can't see why that would be, but I'm desperate, and so prone to superstitious thinking.

If I can successfully diagnose the problems, I'll let y'all know.

Thank you so much for your help so far.

OK, so... after some experimenting, I think I may have found the error... it SEEMS to only happen when I use the jumpIn' command...

From my initial playing around, and replacing all of these commands with jumpMod, it SEEMS to be working OK... now I just have to brute-force test it to make sure that's the case...

If I don't return in 2 days, alert the authorities.